Nammo builds on more than 70 years of experience to deliver some of the world's most capable and reliable tactical propulsion systems. 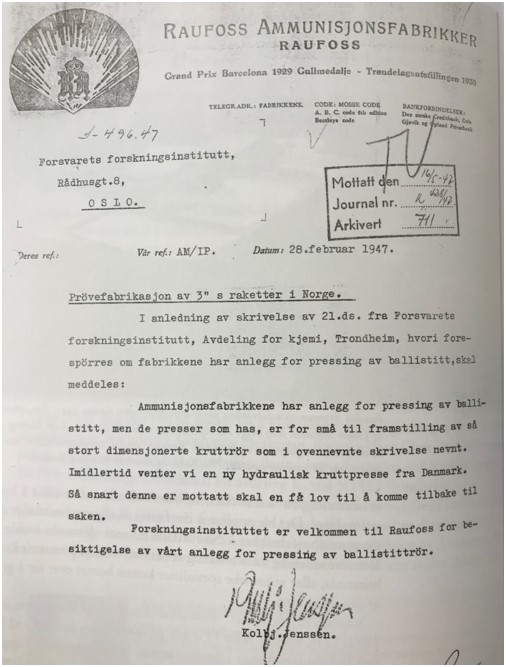 Letter sent in 1947 from what was then Raufoss Ammunition Factories to the Norwegian Defense Research Establishment, regarding the possibility of beginning production of rocket motors.

Nammo’s tactical propulsion experience began in the years immediately following World War II. The War had seen the emergence of a range of new technologies, and the Norwegian government at the time understood that these would have a significant impact on the future of warfare. However, as a small nation, Norway would have to choose which of these new technologies it would invest in domestically, and which ones it would source internationally. To assist in this decision, the newly formed Norwegian Defense Research Establishment was tasked in 1946 to provide a recommendation for domestic defense technology priorities. One of those they identified was rockets and rocket propulsion. Two years later, in 1948, the first rocket propellant was produced at what was then Raufoss Ammunition Factory, today Nammo Raufoss – a facility that to this day remains one of the key providers of rocket and missile propulsion for both European and North American tactical missile programs.

From the start, the Trans-Atlantic link has been essential to the development of this facility. A US-Norwegian Facilities Assistance Program, signed in 1954, supported the development of Raufoss as a source of propellants for all European allies. Only a few years later, starting in 1961, this investment allowed Raufoss and Norway to become one of the main suppliers of rocket motors for European made versions of the AIM-9 Sidewinder. Even today, about 60 years later, Nammo Raufoss still conducts refurbishment and re-graining of AIM-9 rocket motors, continuing a decades long service to allied safety and security.

Today Nammo has positioned itself as one of the leading providers of tactical propulsion systems for missiles and rockets in the Western world, delivering both solid rocket motors and booster rockets, as well as developing a new generation of air-breathing propulsion systems based on solid-fueled ramjets.

Tactical propulsion is used to describe rocket motors intended to be used for smaller missiles and rockets launched from vehicles and aircraft which, due to their size and range, cannot strike targets at distances that would enable strategic effects, or carry weapons or warheads that would be considered strategic.