A Finnish soldier firing a Nammo-made M72 during a training exercise. Photo courtesy of the Finnish Defense Forces 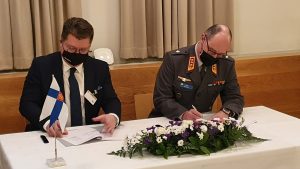 Nammo and the Finnish Defense Forces (FDF) signed a new long-term strategic partnership agreement today during a brief ceremony at the Finnish Defense Command in Helsinki. The agreement is a continuation of a previous security of supply agreement between the two parties signed in 2014, and comes after the Finnish Minister of Defense approved the new agreement on 20 November

“This agreement confirms the close relationship between Nammo and the Finnish government, which has existed since the formation of Nammo in 1998, and before that since our current Finnish factories were founded in the 1920s. We are as committed to Finnish safety and security as we have ever been, and this new agreement will allow us to take on an even greater role and build an even closer partnership with the Finnish Defense Forces,” said Morten Brandtzæg, President and CEO of the Nammo Group.

The Strategic Partnership is a multi-year agreement, and will remain be in force until further notice. The total value is expected to be about EUR 20 million per year.

Nammo’s history in Finland dates back to the years immediately following its independence, when what is today Nammo Lapua, Nammo Vihtavuori and Nammo Sastamala were founded to produce much-needed munitions for its armed forces. The new agreement continues this long-standing history, and covers every aspect of ammunition, explosives and propellants manufacturing in Finland, thereby ensuring a continued domestic security of supply for the Finnish Armed Forces.

Finnish Defense Forces Deputy Chief of Staff for Logistics and Armaments, Lieutenant General Timo Kakkola believes the agreement will strengthen the approach and ways of working that has been developed over the past six years by Nammo and the FDF. At the same time, it represents an important step further where Nammo becomes a true strategic partner for the FDF, helping to manage the full supply chain for ammunition, an essential part of Finnish national readiness.

“Our domestic ammunition and propellants industry still has a significant part to play in our security of supply, and this agreement allows us to continue its development through a long-term partnership with Nammo,” said General Kakkola.

Nammo Lapua is located in the town of Lapua, 80 km east of Vaasa in Finland.…

The facility was acquired by Nammo in 2014. It specializes in the manufacture of components for…

Vihtavuori is located right outside Jyväskylä in Finland. …

Nammo has a sales office in Tampere, approximately two hours northwest of Helsinki.…