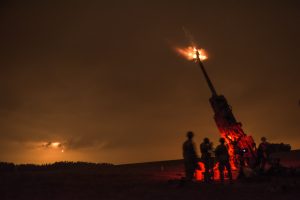 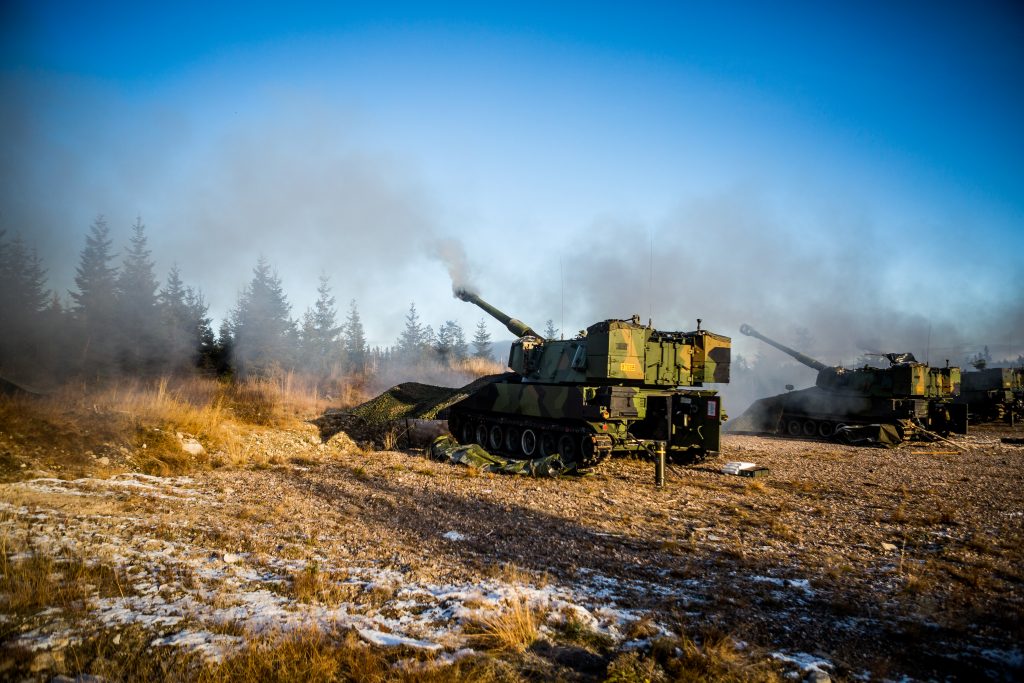 For decades, NATO and US forces have focused on fighting insurgent groups. But what happens when a possible adversary fields modern armies with advanced armor and artillery? When you no longer have air superiority nor significant technological advantages? A modernized artillery delivering massive fires at long range could be one answer.

You may not have heard of the battle of Zenopillya, Ukraine, in july 2014. But it was a watershed moment that marked the return of Russian artillery power. On July 11, two Ukrainian mechanized brigades, the 24th and 72nd, assembled outside of the town. Their goal was to push back breakaway Russian/separatist forces that had taken control over Luhansk and Donetsk oblasts in the previous months. The Ukrainians, however, were unaware of the artillery units that had massed on the Russian side of the border.

The first sign that something was about to happen, was a swarm of Russian UAVs overhead. At the same time, cyberattacks against Ukrainian command and control systems were carried out. Not long after, the Ukrainians were decimated by a massive bombardment by Russian BM-21 “Grad” MLRS systems.

Army major general Robert H. Scales (retired) put it this way in the Washington Post when he wrote about the incident: “(…) a single Russian artillery “fire strike” almost destroyed two Ukrainian mechanized battalions in a few minutes.” Col. Liam Collins (the retired former director of the Modern War institute at West Point) also described the effect as devastating: “The attack lasted only two to three minutes, killed at least 30 soldiers and wounded hundreds more. The attack left the Ukrainian forces decimated and demoralized (…)”

Russia afterwards denied involvement, but the American government on 24 July 2014 stated that it had evidence that the Russian military was firing on Ukrainian territory from across the border. The U.S. stance was confirmed on 27 July, and the day after, the US State Department published satellite photos showing heavy artillery shelling Ukrainian positions.

Six months later, a similar situation would occur at the town of Debaltseve. Here, a Ukrainian force of around 6000 soldiers were shelled mercilessly by Russian salvos of Grad rockets. Again, the effects were devastating: The Ukrainians suffered heavy losses, had to leave most of their equipment in a disorderly retreat, and were largely destroyed as a fighting force. The United States Department of State said that the Russians had deployed “a large amount of artillery and multiple rocket launcher systems around Debaltseve”, and that “Russia was responsible for shelling of the area.”

Russia’s BM-21 Grad systems are certainly not the only ones fielded by the former superpower. The BM-21s have an effective range of 20-45kms (depending on the rockets used). Russia also has access to a large number of other artillery systems:

After Russia’s aggression against Georgia in 2008, Ukraine in 2014 and the operations in Syria, NATO has once again been forced to recognize the country as a possible adversary. A thorough analysis of the country’s military capabilities show that NATO would not necessarily fare well in a conflict. A series of war games conducted by the RAND corporation in 2014 and 2015 concluded that NATO could not successfully defend its most exposed members in the Baltics. Artillery – in large numbers – with a much longer range than its western counterparts, advanced aerial defense systems (like the S-400), advanced, well-equipped and numerous armored forces, and extensive electronic warfare capabilities were among the factors giving Russian military the edge.

Several leading U.S. military analysts and officers came to the same conclusion. When asked in a testimony before the Senate Armed Services Committee, U.S. Army Chief of staff, general Mark Milley said: “We don’t like it, we don’t want it, but yes, technically, we are outranged, outgunned on the ground.”

Russia has long emphasized artillery as one of its armed forces’ most important branches. Historically, this goes back to World War II where its predecessor state – The Soviet Union – established a doctrine where artillery played a dominant part.

U.S. and NATO forces have, on the other hand, emphasized air force much more. And in the years where they fought insurgents or terrorists in Afghanistan and the Middle East, air strikes would accomplish many of the coalition goals. These were often precise, heavily dependent on intelligence, carried out against an enemy without air defense systems and managed to minimize collateral damage. Still, such tactics and doctrine were very different from what could be needed against a peer or a near-peer adversary.

“Against insurgents in Iraq or Afghanistan, we’ve seen a situation where NATO has had total control in the skies. Precision, small warheads and low collateral damage have been important. Excalibur strikes are, in my opinion a good example of this: They’ve largely accomplished their goals in an environment where NATO has focused on air dominance, air support and little use of artillery”, says Thomas Danbolt, Nammo’s vice president Large Caliber.

Danbolt is one of the defense industry’s leading experts on large caliber ammunition, and especially long range capabilities within the artillery domain. He points out, however, that NATO’s main commitment as an alliance is still the collective defense of the alliance members. Fighting ISIS, Taliban or other groups has been important. But that focus might change now – reestablishing defense of the member states’ home territory as the alliance’s main priority.

“USA and NATO have had air superiority since World War II. That has been an enormous advantage, and I believe we’ve built a lot of our military thinking around it. But what do you do in a situation where that advantage is smaller or no longer present?”, Danbolt asks.

1000 projectiles in one minute

A 2019 RAND Corporation report that looked at the U.S. Army’s artillery and other ground fires capacities came to several of the same conclusions as Danbolt:

The U.S. Army mostly seems to agree. Over the past few years it has embarked on an extensive artillery modernization program, one of the largest in their history. Key goals are longer range, maneuverability (both helping against counter battery fire), a better rate of fire, and better precision. The renewed emphasis on the “King of the battlefield” clearly comes from a realization that improvement is needed if NATO/U.S. forces are to be ready against more advanced adversaries again.

“A typical NATO brigade has a single artillery battalion. But if we look at a typical Russian brigade, they have three, often combining rocket and tube artillery. An area roughly equivalent to two football fields can be hit by up to 1000 projectiles or explosives, in the space of one minute. At the same time, Russian forces have developed extensive and advanced anti-air capabilities. In practice, western forces could face an opponent with 3-4 times as much artillery power. Clearly, that is a problem”, Danbolt points out.

During the Cold War, NATO forces were set up with attack helicopters, aircraft designed to fight ground targets, and extensive artillery and armor forces. The system also allowed for losses and replenishments, more than what is the case now. Danbolt believes part of the answer today must be to set up a more robust system that returns artillery to its roots: Delivering massive fires. And he feels the range disadvantage must be eliminated.

Base bleed and rocket assist

On the bright side, two important technologies have emerged that will help NATO countries do just that. The first one is a very simple change to artillery projectiles: A base bleed unit in the back of the shell.

“Base bleed is a simple, proven and very cost-effective concept. It is a small package of propellant in the back of the shell. Once fired, it ignites and sets off an exhaust flame. This doesn’t really give you any propulsion, but it eliminates a lot of drag. And drag is one of the main reasons artillery projectiles slow down. Drag shortens range – by a lot. Conversely, eliminating it will greatly increase range”, Danbolt says.

Nammo is one of several defense companies that have adapted existing artillery shell design to incorporate base bleed units. So far, the work has been very successful: Whereas traditional artillery mostly fires just over 20km, the base bleed variant can reliably reach twice that range, over 40km. Nammo’s ammunition has been qualified by the U.S. Army and can be fired from any 155mm gun.

“Put in simple terms, base bleed is something that’s meant for artillery in its traditional role where it can deliver mass fires. Neither regarding equipment, training nor conceptually we see any big changes. This is just plug and play. The one tradeoff is a slight increase in cost, but it gives you twice the range. In our opinion, that’s a massive advantage. We believe base bleed artillery ammunition can entirely replace standard ammunition, says Danbolt.

The other technology is certainly no newcomer into the field of artillery: Rocket-assisted propulsion (a.k.a. RAP). RAP shells really transform tube artillery into rocket artillery with a range of 70 to 80 kilometers. Conceptually, RAP is different from the Russian approach – you get a slower rate of fire but much better endurance (in this case the ability to continue firing over time).

“In scenarios where you need to combine long range with the ability to deliver massive fires, RAP is a very good option. The artillery gunners simply need to switch to the RAP shells and start firing them. There is a tradeoff here: Since some room is needed for the rocket motor, each shell carries less explosives. But that is the only way to get to that range – and any opponent with long range artillery would have had to do the same, Danbolt explains.

Long range is the new norm

Thomas Danbolt believes that moving towards longer ranges is a shift that could define armed forces for decades to come.

“We see it on the missile side as well. Several countries have already implemented new systems with much longer ranges. Combined with new sensor technologies and guidance systems, these weapons could well define a next conflict. In my opinion, improving artillery range is not only a nice bonus, it’s something we absolutely need to do – or else we risk obsolescence or irrelevance for western artillery systems”, Danbolt says.

Nammo is also working (through a partnership with Boeing) on ramjet artillery shells. These will have even longer ranges of around 150 kilometers and can act as a bit of a hybrid between a missile and an artillery shell.

“Napoleon said that “God is on the side with the best artillery”. I think, with all the new solutions now available, that might still be true. We are seeing a transformation of NATO artillery systems now – with an incredible increase in power, Danbolt concludes.

The M72 has been around for 60 years. Yet, it remains as relevant as ever. 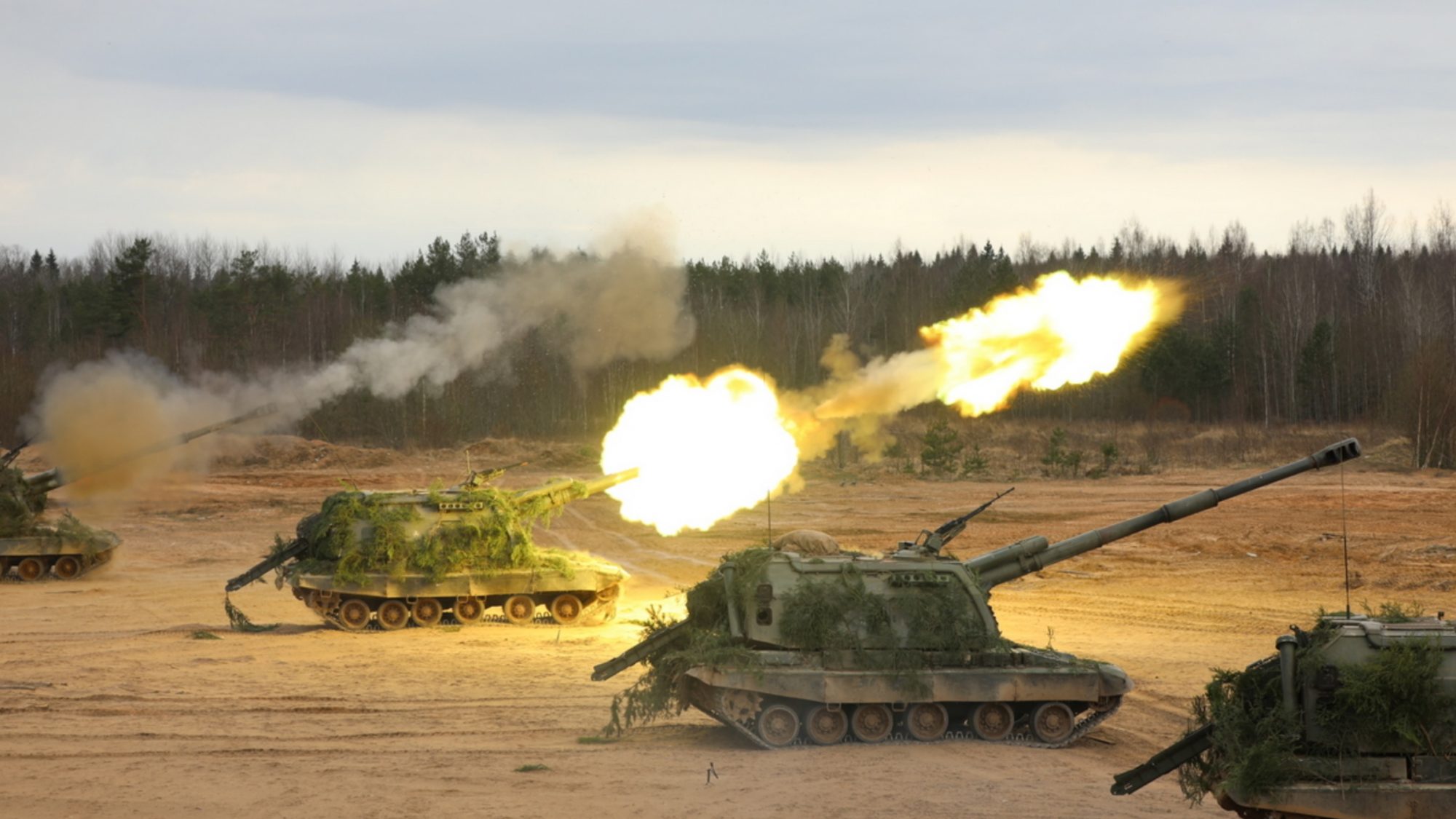